We’re happy to be among the selected projects at Cartoon Movie this year and we’re taking a little break from the shoot to present our film in Lyon in a few days. Having wrapped the longest (1700 frames!) and most complicated shot of the teaser just yesterday, I am looking forward to seeing the footage on the big screen in stereo at the Cartoon Movie.
We’ll post some new pictures and time lapse footage from the shoot as soon as we’re back. In the meantime, here is a little recap of the two previous sets.

I am always in awe of what Anne manages with a few brushstrokes (I’ll probably get a call from her about this little word “few” in here…) Anyway, here are some “rough” style frames she prepared as guidance for compositing and matte painting from the landscape set we recently shot. 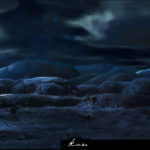 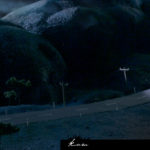 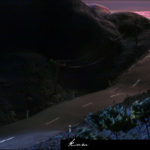 “A lonely bus travels on an inter-city highway under a crescent moon.”
How much work can such an innocent sounding sentence from the script create, you might ask. Well, here is the answer: a round-up of the 2.5 weeks of shoot on the ‘landscape’ set. (And this is excluding the set and prop building…which we blogged about in detail some weeks ago.) This is our largest set – as it tends to become large when you have a bus traveling on a highway in a continuous camera move. Even though our bus is quite tiny, we ended up with a 6.50 m. x 4.50 m. set (basically as much as we could fit into our Waterloo Studio in Hamburg).
Jörg Steegmüller worked on the main construction, sculpting hills and the highway while Nina and Susanna worked on the details like the trees and telegraph poles. (Yes, those in the picture below are tiny, pin-sized isolators molded and cast from 4 different hand-made models.) 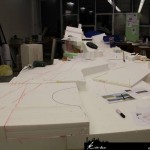 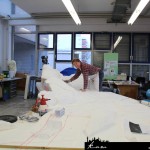 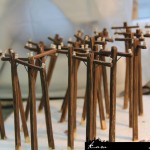 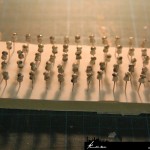 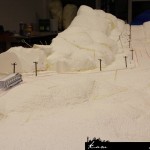 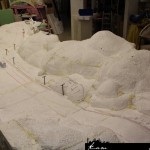 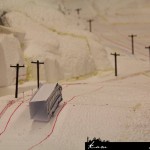 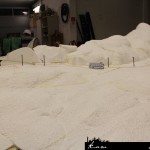 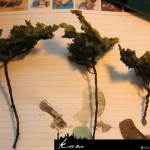 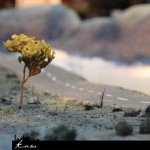 Here comes a little overview on things to expect here in the next months. As you probably noticed from the other posts, artwork is created and sets and puppets are being built, we are just getting ready for a shoot. As part of project development we are producing a 2.5 minutes teaser, to give an impression of how the feature film will look and feel like.
The film is ambitious and also technically very demanding. All this we also wanted to have in our teaser, just a bit shorter (not smaller).
We have a crew of 25+ people from 9 countries, 4 sets built in 4 different scales (shot in 5 different scales) as part of one continuous camera move shot in s3D and 3 main puppets. We will start shooting on 2nd January 2013 until end of February 2013, doing the post production parallel.
Soon there will be coverage of the shoot here, too. Until then, here is a timelapse clip of one of our blocking sessions.